My wife, Julia, and I decided to begin breeding Friesian horses very recently. This breed is quite unique and rare in the United States. 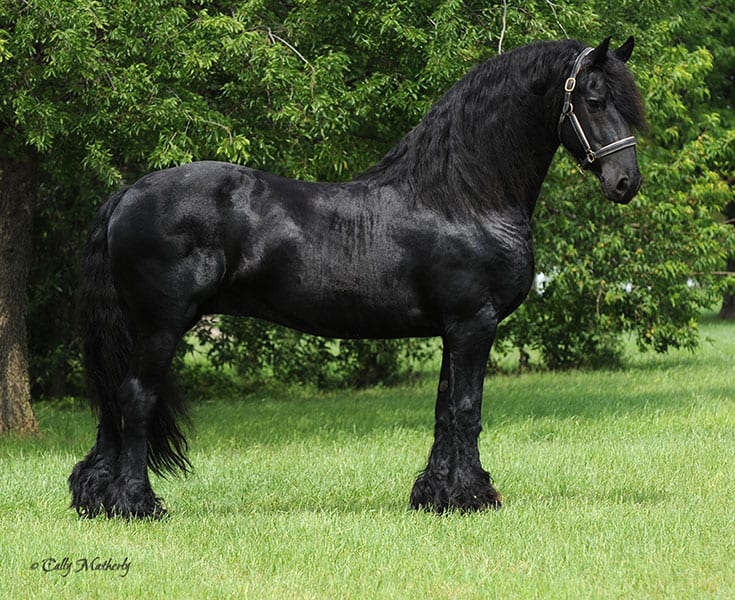 The armored knights found the Friesians to be very desirable, having the strength to carry great weight and still maneuver very easily. The Hungarian King Louis II used a Friesian stallion on the battlefield on June 15, 1526. The Friesian was used as a war horse by Friesian soldiers fighting with the Roman armies, and they were later used by knights who traveled all the way to the Middle East with the Crusaders.

Their suppleness and agility made Friesians sought after in the riding schools of Paris and Spain in the 15th and 16th centuries. In the Middle Ages it was mainly used as a knight’s horse but in the 18th and 19th century the Friesian was especially famous as a trotting horse for short distances. The Friesian was so well adapted as a fast trotting coach horse that it was, in fact, Friesians who invented trotting races over short distances (320 meters) during the 18th century, new possibilities for the use of Friesian horses were sought. Today the Friesian horse is used for many purposes: carriage driving, pleasure riding, combined driving and for riding in many different disciplines. In recent years the Friesian has excelled in the dressage arena.

At one time, the amount of registered Friesian horses became less than a thousand and the fate of the breed was uncertain. In fact, the number of Friesian stallions reputedly was reduced to only three prior to World War I. The Friesian has been saved from extinction by a group of dedicated breeders in Friesland, a northern province of Holland. Breeding is done under strict guidelines such as selection, performance testing, and classification to ensure that the quality of the breed remains very high.

Now the future of this ancient breed looks relatively favorable. There are only about 6000 Friesians in the United States, and they have not been well known here, but the excitement over this breed is catching on.

The Friesian has a very specific appearance. It is a noble animal, possessing a kind and gentle character with intelligence and strength. The horses are always completely black, with a very long and wavy mane and tail, with fetlocks (also called feathers) on the legs. They have a relatively small and noble head, often with an arched neck and very distinctive movement with accentuated leg action and powerful hindquarters. The average height is 15-17 hands with an average weight of 1300-1600 pounds. Generally, the Friesian has a lively and pleasant disposition. 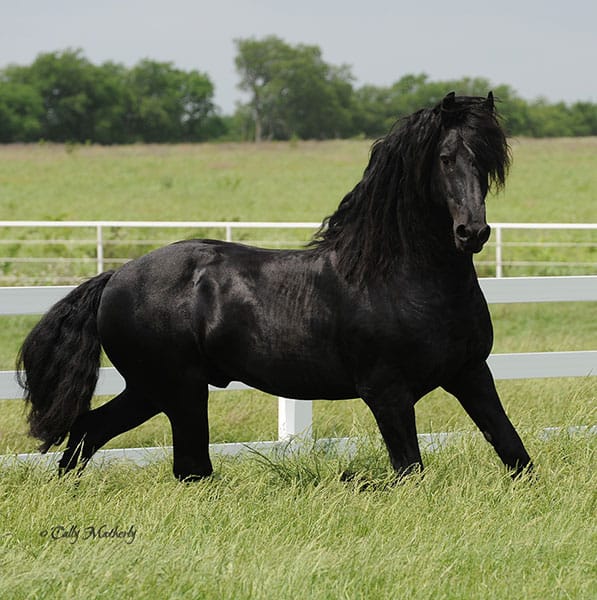 Our Friesian stallion, Ceimpe, was born and raised in Holland. He is a giant, but he has a loving and gentle nature. He is awesome in appearance, looking like a "fantasy" horse from some childhood storybook. Only a unicorn would be more breathtaking.
view horses for sale
Menu